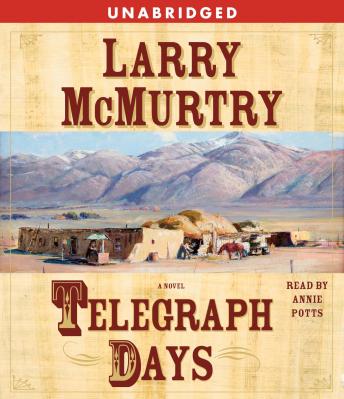 Winner of the 2007 Audie Award for Solo Narration—Female and Finalist for Fiction, Unabridged

From the Pulitzer Prize-winning author of Lonesome Dove comes a big, brilliant, unputdownable saga of the Old West, told in the spunky courageous voice of a young woman named Nellie Courtright.

When twenty-two-year-old Nellie Courtright and her teenage brother Jackson are unexpectedly orphaned by their father’s suicide on his new and unprosperous ranch, they make their way to the nearby town of Rita Blanca, where Jackson manages to secure a job as a sheriff's deputy, while Nellie, ever resourceful, becomes the town’s telegrapher.

Together, they inadvertently put Rita Blanca on the map when young Jackson succeeds in shooting down all six of the ferocious Yazee brothers in a gunfight that brings him lifelong fame, but which he can never repeat because his success came purely out of luck.

Propelled by her own energy and commonsense approach to life, Nellie meets and almost conquers the heart of Buffalo Bill, the man she will love most in her long life, and goes on to meet, and witness the exploits of, Billy the Kid, the Earp brothers, and Doc Holliday. She even gets a ringside seat at the Battle at the O.K. Corral, the most famous gunfight in Western history, and eventually lives long enough to see the West and its gunfighters turned into movies.

It’s entertaining but full of historical errors. I’ll cite just two examples. 1) Wild Bill is said to be discussing Billy the Kid (Hickok was killed 4 years before McCarty (Kid) was known to anyone. And, 2) the telegraph announcing Hickok’s death reports Deadwood to be in South Dakota. The Dakota territory wasn’t divided until both attained statehood in 1889— 13 years after Hickok was killed. Additionally, the effect of having all the celebrities of the Old West know each other, and the central character, is to be immersed in a Forrest Gump does the Old West kind of tale. A cute story, but a FAR cry from Lonesome Dove AND reality.

just fell in love with it

What a great book every bit as good as Lonesome dove! Mr. McMurtry is a writer of master piece frontier fiction that makes you feel lost and engaged in the world of the old west! Thank you McMurtry

I've read/listened to several Larry McMurtry books and I guess nothing is going to measure up to Lonesome Dove. In spite of that, this one was not too bad. Its a fictional autobiography by a very unsual woman who seemed to be a partcipant or eyewitness to many of the significant events of the old west. As usual, the author gives us a very stark and unromantic slice of the old west. Different, but worth a read (or listen).

I don't read many westerns, but the story line was interesting. Who hasn't hear of some of the famous characters in this book? And who could not love hearing Annie Potts. Mr. McMurtry was so fortunate to have her narrate this book. She was fabulous, great character representation.

McMurtry should have hung it up with Lonesome Dove - a real masterpiece. Anything else since then pales by comparison. I listened to the first disk and then sent it back - the writing is junvinale at best and not at all entertaining. Story structure doesn't make a lot of sense and is a light year from reality.