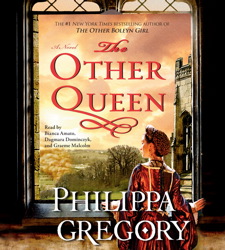 #15 of The Plantagenet and Tudor Novels

Fleeing violent rebellions in Scotland, Mary looks to Queen Elizabeth of England for sanctuary. Though promised protection, Mary, perceived as a serious threat to the English crown, is soon imprisoned by her former friend as a “guest” in the house of George Talbot, Earl of Shrewsbury, and his indomitable wife, Bess of Hardwick. The newly married couple welcomes the condemned queen into their home, certain that serving as her hosts and jailers will bring them an advantage in the cutthroat world of the Elizabethan court.

To their horror, they grow to realize that the task will bankrupt their estate and lose them what little favor they’ve managed to gain as their home becomes the epicenter of intrigue and rebellion against Queen Elizabeth. And Mary is not as hopeless as she appears, manipulating the earl and spinning her own web of treachery and deceit, as she sharpens her weapons to reclaim her Scottish throne—and to take over Queen Elizabeth’s of England.

"The Other Queen" I listened to was an abridgment, which may not always give you a true view of the story. With this in mind, I thought Mary Queen of Scots was not right in the head. I realize that she was grabbing at opportunities but she did not look at her circumstances beforehand. She just went with the old system, not recognizing the new. This is a problem many of us have seen for the last 100 years. The rules/technology has changed so fast we cannot keep pace. Living in the past can kill us as it did Queen Mary.

I enjoy historical fiction and found this story engaging from the moment I stuck in the first CD. I've read quite a bit about Mary Queen of Scots, but it was a long time ago so I am wondering just how true to history this was. Regardless, I would recommend this. They used a few different male and female narrators and that also made the story interesting to listen to.

Loved this book. The three different readers added to the dramatic effect. Wish it wasn't abridged!!!

I enjoyed the narration of this book more than anything. I'm a huge fan of Philippa Gregory and have read most of her books, but I didn't care for the ending on this one so much. I felt that the story was focused of course on Queen Mary, but in the end it totally turned and focused on Bess Talbot instead. Overall, I enjoyed it!