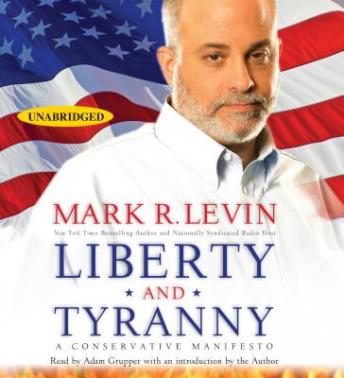 When nationally syndicated radio host Mark R. Levin’s Liberty and Tyranny appeared in the early months of the Obama presidency, Americans responded by making his clarion call for a new era in conservatism a #1 New York Times bestseller for an astounding twelve weeks. As provocative, well-reasoned, robust, and informed as his on-air commentary, with his love of our country and the legacy of our Founding Fathers reflected on every page, Levin’s galvanizing narrative provides a philosophical, historical, and practical framework for revitalizing the conservative vision and ensuring the preservation of American society.

In the face of the modern liberal assault on Constitution-based values, an attack that has resulted in a federal government that is a massive, unaccountable conglomerate, the time for reinforcing the intellectual and practical case for conservatism is now. In a series of powerful essays, Levin lays out how conservatives can counter the tyrannical liberal corrosion that has filtered into every timely issue affecting our daily lives, from the economy to health care, global warming to immigration, and more.