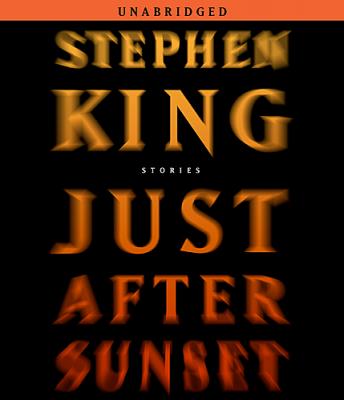 With stories that have appeared in The New Yorker, Playboy, and McSweeney’s, this classic collection displays the phenomenally broad readership of #1 New York Times bestselling author Stephen King.

Just After Sunset—call it dusk, call it twilight, it’s a time when human intercourse takes on an unnatural cast, when nothing is quite as it appears, when the imagination begins to reach for the shadows as they dissipate to darkness and living daylight can be scared right out of you. It’s the perfect time for Stephen King.

Who but Stephen King would turn a Port-O-San into a slimy birth canal, or a roadside honky-tonk into a place for endless love? A book salesman with a grievance might pick up a mute hitchhiker, not knowing the silent man in the passenger seat listens altogether too well. Or an exercise routine on a stationary bicycle, begun to reduce bad cholesterol, might take its rider on a captivating—and then terrifying—journey. Set on a remote key in Florida, “The Gingerbread Girl” is a riveting tale featuring a young woman born vulnerable and resourceful. In “Ayana,” a blind girl works a miracle with a kiss and the touch of her hand.

For King, the line between the living and the dead is often blurry, and the seams that hold our reality intact might tear apart at any moment. In one of the longer stories here, “N.,” a psychiatric patient’s irrational thinking might create an apocalyptic threat in the Maine countryside…or keep the world from falling victim to it.

I love Stephen King, but this was a turkey of a book. Me thinks that King is much better when it comes to novels than short stories. The stories were so forgettable, I have nothing more to add.

I have read many of Stephen King's books and have enjoyed them very much. However, this book is just an adaptation of a lot of short stories, most of which have been published before with only one or two exceptions that is to say new stories. The rest are just a bunch of short stories that have already been published and bunched together under the title of a new book I find that that is very, very unprofessional and shall review Mr. King's books more closely and find out what is in them before I spend my hard-earned money. Listening to books that I have are ready. Listen to.

Some of the stories were really good, others you will not be able to wait until the end. I just wish there were a few more settings. I am getting tired of Florida and Maine.

A good collection of stories with ratings ranging from 2 stars to 5 stars. If you're a Stephen King fan their are some stories that are sure to delight you.

I am a King and Koontz fan. Great stories. Loved Gingerbread Girl, Cat From Hell, etc. All in all it was great an I recommend. I skipped maybe 2 stories that didnt catch my interest.

I love Stephen King short stories and this one was a great return to the form ....rent it--then go buy it !!

We were unable to enjoy the stories due to the nonstop skipping of the discs. However, the stories were true Stephen King all the way through. I will purchase the book and try again.