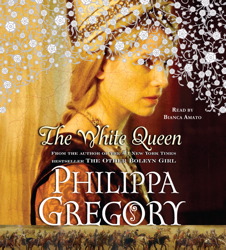 The White Queen: A Novel

#2 of The Plantagenet and Tudor Novels

The inspiration for the critically acclaimed Starz miniseries The White Queen, #1 New York Times bestselling author Philippa Gregory brings to life the extraordinary story of Elizabeth Woodville, a woman who rises from obscurity to become Queen of England, and changes the course of history forever.

Elizabeth Woodville is a woman of extraordinary beauty and ambition. Her mother is Jacquetta, also known as the mystical lady of the rivers, and she is even more determined to bring power and wealth to the family line. While riding in the woods one day, Elizabeth captures the attentions of the newly crowned King Edward IV and, despite her common upbringing, marries him in secret.

When she is raised up to be his queen, the English court is outraged, but Elizabeth rises to the demands of her exalted position and fights for her family’s dominance. Yet despite her best efforts, and even with the help of her mother’s powers, her two sons become pawns in a famous unsolved mystery that has confounded historians for centuries: the lost princes in the Tower of London.

In this dazzling account of the deadly Wars of the Roses, brother turns on brother to win the ultimate prize: the throne of England.

Love this entire series. I've read the books and seen the movies, but it is a treat to lie back, close my eyes and just listen and imagine.

I just wish there was an unabridged version available. The story was still very good, but you could tell things were moving too quickly without complete resolution - which I attribute to it being abridged. Enjoyed the reader's voice though!

So far this is my favorite in the series, love it.

This series is amazing! It is a wonderful story well written by Philippa with as much history and research jam packed in as possible with it still being extremely interesting.

Very anticlimactic. I kept expecting something to happen but there was always a mediocre solution or the problem was brushed off. It actually made me confused, thinking my audiobook was cut short by the poor or should I say lack of an ending.

This title is due for release on August 18, 2009
We'll send you an email as soon as it is available!