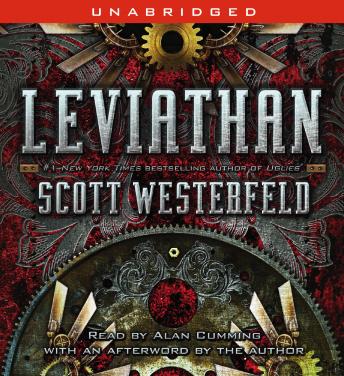 It is the cusp of World War I. The Austro-Hungarians and Germans have their Clankers, steam-driven iron machines loaded with guns and ammunition. The British Darwinists employ genetically fabricated animals as their weaponry. Their Leviathan is a whale airship, and the most masterful beast in the British fleet.

Aleksandar Ferdinand, a Clanker, and Deryn Sharp, a Darwinist, are on opposite sides of the war. But their paths cross in the most unexpected way, taking them both aboard the Leviathan on a fantastical, around-the-world adventure….One that will change both their lives forever.

Very unique ideas, fresh! I've never thought of inventions such as these, especially the organic ones. Fantastically read!

Very good book with WWI and fiction mixed in. The narration was amazing, including the accents!

Nice story for an early teen reader. Had I been aware that this series was developed for early teen readers I would have stayed away from it. My fault for not doing my research into the book, Character development is pretty thin. Author into cute technological developments. One wonders how developed biological life forms have developed no rights or respect from their developers. The "walker" is a theft from Star Wars. If the second book in the series was not free I would not have paid to download it.