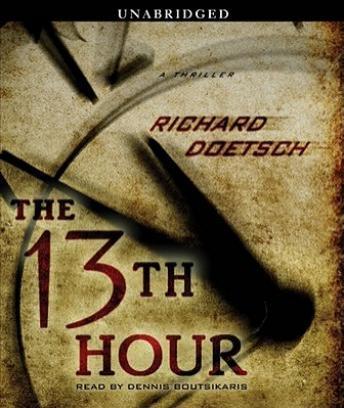 The 13th Hour: A Thriller

In this original, twisty, and breakneck “modern masterpiece” (The Providence Journal), a man goes back in time to prevent the murder of his wife.

At 9 p.m., Nick Quinn is sitting in a jail cell, arrested for the murder of his wife, Mary, when he is offered an astonishing opportunity. Given a talisman by a mysterious stranger, Nick now has the ability to go back in time, one hour at a time, for a total of twelve hours.

With the chance to discover Mary’s killer and even prevent her death, Nick races against the clock, only to discover that his actions in the past could have unexpected repercussions on the future. Worse, if he hasn’t set things right by the thirteenth hour, all will be lost.

“If there ever was a novel that deserves to be read in one sitting, this is it. With a totally original and compelling story line, The 13th Hour” (Booklist, starred review) is an unforgettable thrill ride.

This book is good up to a point. Just because the protagonist jumps back in time, I don't know why the author felt that that also meant that the backstory had to be continually repeated. It got quite boring. It's as if this book is taking place in real time, so it has to take 13 hours to listen to it. I finally gave up (on CD 7) and skipped to the last CD. The ending was gripping - if only it had come sooner!!

I liked this book...True towards the end it started to drag and i was so tempted to skip ahead... but I didn't and I glad i didn't...

I enjoyed the twist on time travel in this novel. Well worth listening to. The narrator was enjoyable and the author did a magnificent job of painting the scenes so that I could clearly imagine what was happening. I found myself holding my breath at the very end! My husband finished the book before I did simply because he could not turn it off and go to bed. Get this one, you won't regret it!

What a great story!! I was glued from start to finish. I look for more books from this author!

This book is everything the overview says it is! The backward chronology is only a little confusing for a short time but then you can understand how time proceeds. The author is unusually creative with this device and it works well. Now that I've listened to it once, I want to hear it again, just to be sure I caught everything he offers.

Takes a great leap in the credibility department. Time travel is one thing but this seems to be way out there and explanations are few. However, the story is well written keeping you on the edge all the time. The question of whether we could actually improve our lives if we could turn back time has been addressed many times and here is another.