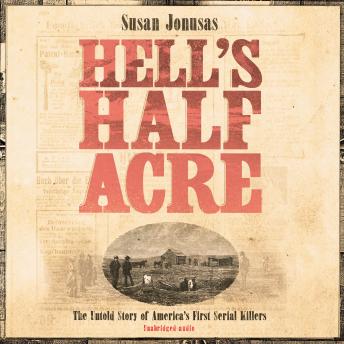 A suspense filled tale of murder on the American frontier—shedding new light on a family of serial killers in Kansas, whose horrifying crimes gripped the attention of a nation still reeling from war.

In 1873 the people of Labette County, Kansas made a grisly discovery. Buried by a trailside cabin beneath an orchard of young apple trees were the remains of countless bodies. Below the cabin itself was a cellar stained with blood. The Benders, the family of four who once resided on the property were nowhere to be found. The discovery sent the local community and national newspapers into a frenzy that continued for decades, sparking an epic manhunt for the Benders.

The idea that a family of seemingly respectable homesteaders—one among the thousands relocating farther west in search of land and opportunity after the Civil War—were capable of operating "a human slaughter pen" appalled and fascinated the nation. But who the Benders really were, why they committed such a vicious killing spree and whether justice ever caught up to them is a mystery that remains unsolved to this day. Set against the backdrop of postbellum America, Hell’s Half-Acre explores the environment capable of allowing such horrors to take place. Drawing on extensive original archival material, Susan Jonusas introduces us to a fascinating cast of characters, many of whom have been previously missing from the story. Among them are the families of the victims, the hapless detectives who lost the trail, and the fugitives that helped the murderers escape.

Hell’s Half-Acre is a journey into the turbulent heart of nineteenth century America, a place where modernity stalks across the landscape, violently displacing existing populations and building new ones. It is a world where folklore can quickly become fact and an entire family of criminals can slip through a community’s fingers, only to reappear in the most unexpected of places.

This title is due for release on May 26, 2022
We'll send you an email as soon as it is available!