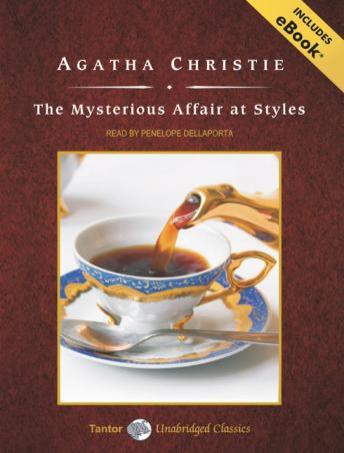 The Mysterious Affair at Styles

Set in Essex in the English countryside, The Mysterious Affair at Styles is one of the great classic murder mysteries. The victim, Mrs. Emily Inglethorp, is the wealthy mistress of Styles Court. After an evening of entertaining family and guests, she is found poisoned in her locked bedroom. The long list of suspects includes her gold-digging new husband, her stepsons, her best female friend, and a visiting doctor. As luck would have it, a brilliant, if rather eccentric, detective is among the company at Styles.

In this, her first published mystery, Agatha Christie introduces her beloved Belgian inspector Hercule Poirot, who methodically pieces together the intricate evidence of this bewildering crime. From his very first appearance, Poirot amuses audiences with his oddly fastidious habits-then astonishes them with the power of his razor-sharp mind. Christie keeps listeners guessing as to the murderer's identity until Poirot finally presents his ingenious solution to this landmark mystery.

This title is due for release on February 9, 2009
We'll send you an email as soon as it is available!