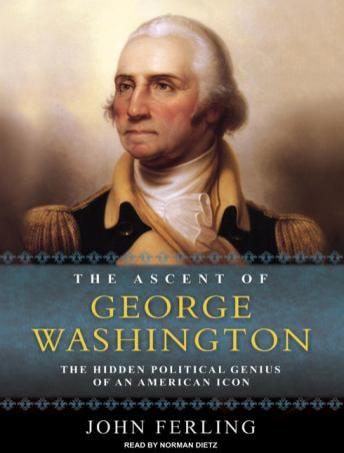 The Ascent of George Washington: The Hidden Political Genius of an American Icon

Even compared to his fellow founders, George Washington stands tall. Our first president has long been considered a stoic hero, holding himself above the rough-and-tumble politics of his day. Now John Ferling peers behind that image, carefully burnished by Washington himself, to show us a leader who was not only not above politics but a canny infighter-a master of persuasion, manipulation, and deniability.

In the War of Independence, Washington used his skills to steer the Continental Army through crises that would have broken less determined men; he squeezed out rival generals and defused dissent from those below him. Ending the war as a national hero, Washington 'allowed' himself to be pressed into the presidency, guiding the nation with the same brilliantly maintained pose of selfless public interest. In short, Washington deftly screened a burning ambition behind his image of republican virtue-but that image, maintained not without cost, made him just the leader the overmatched army, and then the shaky young nation, desperately needed.

Ferling argues that not only was Washington one of America's most adroit politicians-the proof of his genius is that he is no longer thought of as a politician at all.

Ascent of George Washington: The Hidden Political Genius of an American Icon

This title is due for release on June 8, 2009
We'll send you an email as soon as it is available!