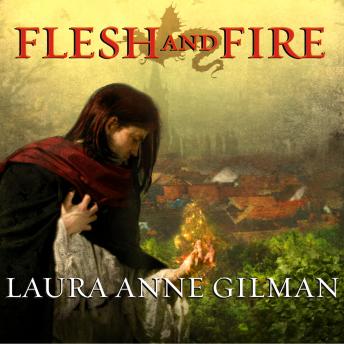 Flesh and Fire: Book One of the Vineart War

Once, all power in the Vin Lands was held by the prince-mages, who alone could craft spellwines and who selfishly used them to increase their own wealth and influence. But their abuse of power caused a demigod to break the Vine, shattering the power of the mages. Now, fourteen centuries later, it is the humble Vinearts who hold the secret of crafting spells from wines, the source of magic, and they are prohibited from holding power.

But now rumors come of a new darkness rising in the vineyards. Strange, terrifying creatures, sudden plagues, and mysterious disappearances threaten the land. Only one Vineart senses the danger, and he has only one weapon to use against it: a young slave. His name is Jerzy, and his origins are unknown, even to him. Yet his uncanny sense of the Vinearts' craft offers a hint of greater magics within-magics that his Master, the Vineart Malech, must cultivate and grow. But time is running out. If Malech cannot teach his new apprentice the secrets of the spellwines, and if Jerzy cannot master his own untapped powers, the Vin Lands shall surely be destroyed.

In Flesh and Fire, the first entry in a spellbinding new trilogy, Laura Anne Gilman conjures a story as powerful as magic itself, as intoxicating as the finest of wines, and as timeless as the greatest legends ever told.

Flesh and Fire: Book One of the Vineart War