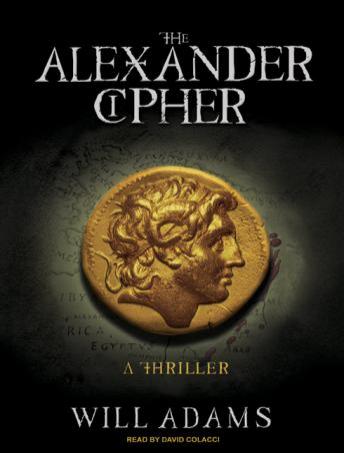 The Alexander Cipher: A Thriller

Written By: Will Adams

Egyptologist Daniel Knox's lifelong fascination with Alexander the Great and his tomb, a fabled wonder of the ancient world, could be the death of him. After construction workers excavating in Alexandria expose a catacomb dating back to ancient times, Knox eagerly sneaks in to scout the cavernous and dusty site. Among the relics he finds clues that may solve one of the world's greatest mysteries: the last resting place of Alexander the Great.

An unconquerable warrior king, Alexander was the single most powerful man on the planet and thought to be a god. Now, nearly 2,500 years later, the discovery of his tomb, seemingly lost forever, is within reach, triggering a deadly hunt for one of the greatest treasures of all time. Knox is not the only seeker; others are after the prize, and they would kill to win it.

In the spirit of the great adventure-thrillers by Douglas Preston and Lincoln Child, Clive Cussler, Raymond Khoury, and Steve Berry, The Alexander Cipher is a rip-roaring ride through history, archaeology, and the great deserts of Egypt.