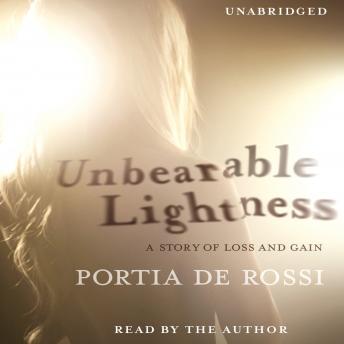 Unbearable Lightness: A Story of Loss and Gain

“An unusually fresh and engrossing memoir of both Hollywood and modern womanhood.” —Los Angeles Times

In this searing, unflinchingly honest memoir, actress Portia de Rossi shares the truth of her long battle to overcome anorexia and bulimia while living in the public eye, and details the new happiness and health she has found in recent years—including her coming out and her marriage to Ellen DeGeneres.

In this groundbreaking memoir, Portia de Rossi reveals the pain and illness that haunted her for decades, from the time she was a twelve-year-old girl working as a model in Australia, through her early rise to fame as a cast member of the hit television show Ally McBeal. All the while terrified that the truth of her sexuality would be exposed in the tabloids, Portia alternately starved herself and binged, putting her life in danger and concealing from herself and everyone around her the seriousness of her illness.

She describes the elaborate rituals around food that came to dominate hours of every day and explores the pivotal moments of her childhood that set her on the road to illness. She reveals the heartache and fear that accompany a life lived in the closet, a sense of isolation that was only magnified by her unrelenting desire to be ever thinner, ever more in control of her body and the number of calories she consumed and spent.

From her lowest point, Portia began the painful climb back to a life of health and honesty, falling in love and marrying Ellen DeGeneres and emerging as an outspoken and articulate advocate for gay rights and women’s health issues. In this remarkable, landmark book, she has given the world a story that inspires hope and nourishes the spirit.

Kind of blew my mind. I never realized what goes on in the mind of an anorexic. Portia comes across as a very smart who was able to save her life and find true love. I also found it interesting that she no longer as an Australian accent. Lovely speaking voice.

I really enjoyed this book and it was great listening to Portia tell her story.

It was great! This is the first book I listened to when signing up for audiobooks.com. I really enjoyed it!

I personally loved the book! I read a lot and started listening to books while I work, this is one of my favorite books now. I found her voice to be very soothing as well.

This book was so well written, and has so much to say about our struggles with food. She let us in to her heart, and I wept for her, and for me, and for everyone with an eating disorder. I would highly recommend this book.

I loved hearing her weave her story together. It was believable and sad. I had similar issues as a child and it was very revealing to hear someone else share this with me. I loved hearing her voice. I appreciate that she took the time to think through this and share some of her moments of shame and fear. I wish I could find more books just like this, as I feel better and stronger after listening. AND, it kept me busy for so many long hours in the car and cleaning.

This book is an eloquent peek into the mind of one whose thinking has become distorted and irrational. It gives insight into any disordered thinking. She is so hard on herself whilst she is going through this, and she cannot see what we can see. For a while, we can also see what she can see. That is its power. Bravo, Portia!

Wow! I had no idea that Portia was so messed up before. It's interesting to hear a tale of anorexia. You always see those 'way to skinny' people and I always wondered what goes on in their heads.

This woman is so full of herself, it is unbelievable. I always find it interesting when I dislike a person MORE after reading their autobiography. That is a sign that that person is not so great. I though this woman was interesting before listening to her dribble for too many CD's. Her voice is terrible.

Interesting book. Hope a lot of people with eating disorders read or listen to this book. Blew my mind when Portia stated she wouldn't brush her teeth with toothpaste for fear of gaining weight from the toothpaste!

How wonderfully told by Portia. For such a beautiful and talented young womn to have such low self esteem is a tragedy. Listening to Ms De Rossi tell her of her struggles is an amazing look into the difficult world of living in the public persona. You greatly deserve all of the happiness you have finally found.