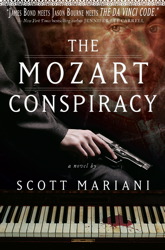 The Mozart Conspiracy: A Thriller

While investigating the death of his lover’s brother, Ben Hope returns for a race around Europe as he uncovers clues and secrets suggesting the murder of eighteenth-century composer Mozart in this suspenseful thriller by international bestselling author Scott Mariani.

When former British Special Air Service officer Ben Hope is enlisted by his first love, the beautiful singer Leigh Llewellyn, to investigate her brother Oliver’s death, their search leads to a blood-soaked puzzle dating back to the eighteenth-century and the death of Wolfgang Amadeus Mozart. The famous composer was a noted Freemason and evidence suggests it was possible he was killed by a shadowy splinter group of the organization.

The official report states that Oliver died in a tragic accident, but the day he died, he sent Leigh all the files concerning an unfinished book on Mozart. As Ben and Leigh piece together Oliver’s research, they receive a missing letter written by the composer himself that indicates both men’s deaths could have been murder.

From Oxford’s dreamy spires to Venice’s labyrinthine canals and Vienna’s majestic palaces, Ben and Leigh must race across Europe to uncover the truth behind the Mozart conspiracy.