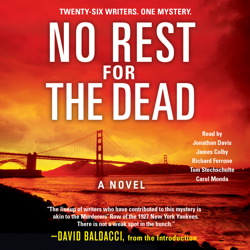 No Rest for the Dead

“The lineup of writers who have contributed to this mystery is akin to the Murderers’ Row of the 1927 New York Yankees. There is not a weak spot in the bunch.” —David Baldacci, from the Introduction

Alexander McCall Smith. Sandra Brown. Faye Kellerman. J.A. Jance. Jeffery Deaver. Kathy Reichs. Lisa Scottoline. Jeff Lindsay. These are only a handful of the names that make up the all-star lineup of authors behind No Rest for the Dead, a tale of vengeance, greed, and love that flows seamlessly, in the words of David Baldacci, “as it passes from one creator’s mind to the next.”

When Christopher Thomas, a ruthless curator at San Francisco’s McFall Art Museum, is murdered and his decaying body is found in an iron maiden in a Berlin museum, his wife, Rosemary, is the primary suspect, and she is tried, convicted, and executed. Ten years later, Jon Nunn, the detective who cracked the case, is convinced that the wrong person was put to death. In the years since the case was closed, he’s discovered a web of deceit and betrayal surrounding the Thomases that could implicate any number of people in the crime. With the help of the dead woman’s friend, he plans to gather everyone who was there the night Christopher died and finally uncover the truth, suspect by suspect. Solving this case may be Nunn’s last chance for redemption…but the shadowy forces behind Christopher’s death will stop at nothing to silence the past forever.

In this innovative storytelling approach, each of these twenty-five bestselling writers brings their distinctive voice to a chapter of the narrative, building the tension to a shocking, explosive finale. No Rest for the Dead is a thrilling, page-turning accomplishment that only America’s very best authors could achieve.

It did not flow, each chapter written by a different author. Found it to be stupid.

This was a great book, I loved how you had to follow each author's writing style to understand their contribution to the story! Great ending!

When choosing this book I didn't realize it was written by so many of my favorite writers. It got a little mixed up a couple of times but the book was entertaining.

I was drawn to the collaborative effort of so many well-known authors and was not disappointed. Thoroughly enjoyable! The readers were easy to listen to, which is also very important in the overall experience.

Great book. I loved the way all the writers came together and delivered an exceptional story line and the twist near the end was awsome. Nice job guys.

It's rare a mystery/suspense novel keeps me guessing until the end, yet this one did. Some of the finest writing talent pooled together crafted a novel that was fast paced, yet detailed. Serial novels are rare; good serial novels are next to nonexistent. This is a good one, and because of this there are a few novelists whose work I'm planning to explore.