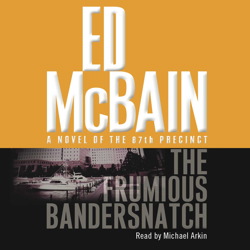 The kidnapping was audacious,
and there were plenty of witnesses...
But no one attending the dazzling launch party for up-and-coming pop idol Tamar Valparaiso knew what they were seeing when, halfway through her performance, masked men whisked the sexy young singer off a luxury yacht and into a waiting speedboat. Now, the evening that was supposed to send Tamar's debut album, Bandersnatch, skyrocketing with a million-dollar promotional campaign has instead kicked off a terrifying countdown for Steve Carella and the detectives of the 87th Precinct. Time is their enemy in the race to find Tamar's abductors -- before the rising star is extinguished forever.

This is an entertaining novel. It isn't exactly heart pounding, but it's a good, run-of-the mill thriller. It's got it's share of action in there.

This story never really got off the ground. I did finish listening to it, but it was an effort. Do not bother with this one.

The story itself was lighter than air. The whoddunnit surprise was obvious by the second disc, because there was only one main character besides the detectives and the victim, so really, it had to be that character. Possibly the result of bad abridgement, but there were entire sub-plots that never connected to the main story line at all, and seemed to exist primarily to allow the author to expound on the nature of writing. The narration was largely fine on the non-dialogue, but he mixed up the female voices frequently and cast every gay character as a lisping stereotype.

I've read a couple of Ed McBain mysteries and liked them. Not so with this one. For once, I didn't finish listening to the CD. The racy subject matter and the obscenities grated on me, and I didn't find much else to make me want to keep listening. Maybe it works in print, but I didn't like it on audio.