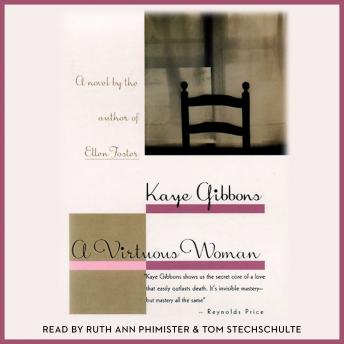 When Blinking Jack Stokes met Ruby Pitt Woodrow, she was twenty and he was forty. She was the carefully raised daughter of Carolina gentry and he was a skinny tenant farmer who had never owned anything in his life. She was newly widowed after a disastrous marriage to a brutal drifter. He had never asked a woman to do more than help him hitch a mule. They didn't fall in love so much as they simply found each other and held on for dear life.

Kaye Gibbons’s first novel, Ellen Foster, won the Sue Kaufman Prize for First Fiction from the American Academy and Institute of Arts and Letters and the praise of writers from Walker Percy to Eudora Welty. In A Virtuous Woman, Gibbons transcends her early promise, creating a multilayered and indelibly convincing portrait of two seemingly ill-matched people who somehow miraculously make a marriage.