Greedy Bastards: Corporate Communists, Banksters, and the Other Vampires Who Suck America Dry 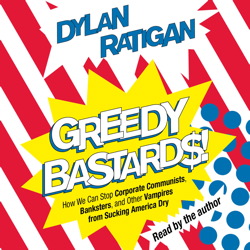 DYLAN RATIGAN’S mission is to uncover never-before-seen solutions to the most pressing issues of our time: government corruption, corporate communism, an ailing health care system, an age-old dependency on foreign oil, and a broken educational system. In this groundbreaking book, Ratigan makes a case that America has the opportunity to prosper, but only by setting clear goals. Ratigan believes that this country, now more than ever, needs passionate debate and smart policy, a brazen willingness to scrap what doesn’t work, and the entrepreneurial spirit to try what does. Ratigan has compiled brash and fresh solutions for building a new and better America, and with this book he has started the debate America deserves.

Greedy Bastards: Corporate Communists, Banksters, and the Other Vampires Who Suck America Dry