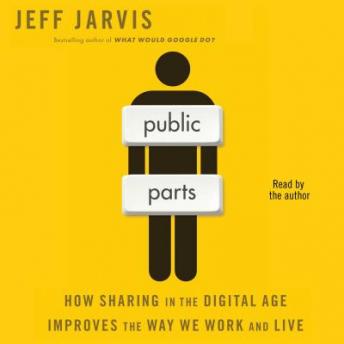 Public Parts: How Sharing in the Digital Age Improves the Way We Work and Live

International bestselling author and optimistic internet thinker Jeff Jarvis examines the way the Internet has changed the way we form communities, create identities, engage in commerce, and live our lives.

A visionary and optimistic thinker examines the tension between privacy and publicness that is transforming how we form communities, create identities, do business, and live our lives.

Thanks to the internet, we now live—more and more—in public. More than 750 million people (and half of all Americans) use Facebook, where we share a billion times a day. The collective voice of Twitter echoes instantly 100 million times daily, from Tahrir Square to the Mall of America, on subjects that range from democratic reform to unfolding natural disasters to celebrity gossip. New tools let us share our photos, videos, purchases, knowledge, friendships, locations, and lives.

Yet change brings fear, and many people—nostalgic for a more homogeneous mass culture and provoked by well-meaning advocates for privacy—despair that the internet and how we share there is making us dumber, crasser, distracted, and vulnerable to threats of all kinds. But not Jeff Jarvis.

In this shibboleth-destroying book, Public Parts argues persuasively and personally that the internet and our new sense of publicness are, in fact, doing the opposite. Jarvis travels back in time to show the amazing parallels of fear and resistance that met the advent of other innovations such as the camera and the printing press. The internet, he argues, will change business, society, and life as profoundly as Gutenberg’s invention, shifting power from old institutions to us all.

Based on extensive interviews, Public Parts introduces us to the men and women building a new industry based on sharing. Some of them have become household names—Facebook’s Mark Zuckerberg, Google’s Eric Schmidt, and Twitter’s Evan Williams. Others may soon be recognized as the industrialists, philosophers, and designers of our future.

Jarvis explores the promising ways in which the internet and publicness allow us to collaborate, think, ways—how we manufacture and market, buy and sell, organize and govern, teach and learn. He also examines the necessity as well as the limits of privacy in an effort to understand and thus protect it.

This new and open era has already profoundly disrupted economies, industries, laws, ethics, childhood, and many other facets of our daily lives. But the change has just begun. The shape of the future is not assured. The amazing new tools of publicness can be used to good ends and bad. The choices—and the responsibilities—lie with us. Jarvis makes an urgent case that the future of the internet—what one technologist calls “the eighth continent”—requires as much protection as the physical space we share, the air we breathe, and the rights we afford one another. It is a space of the public, for the public, and by the public. It needs protection and respect from all of us. As Secretary of State Hillary Clinton said in the wake of the uprisings in the Middle East, “If people around the world are going to come together every day online and have a safe and productive experience, we need a shared vision to guide us.” Jeff Jarvis has that vision and will be that guide.

Public Parts: How Sharing in the Digital Age Improves the Way We Work and Live