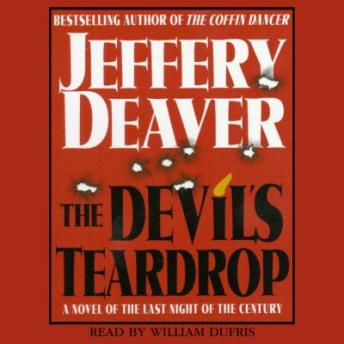 Devil's Teardrop: A Novel of the Last Night of the Century

It’s New Year’s Eve, December 31, 1999, and Washington, DC, is under siege. Early in the day, a grisly machine gun attack in the Dupont Circle Metro station leaves dozens dead and the city crippled with fear. A note delivered to the mayor’s office pins the massacre on the Digger, a robotlike assassin programmed to wreak havoc on the capital every four hours—until midnight. Only a ransom of $20 million delivered to the Digger’s accomplice—and mastermind—will end the death and terror. But the Digger becomes a far more sinister threat when his accomplice is killed in a freak accident while en route to the money drop. With the ransom note as the single scrap of evidence, Special Agent Margaret Lukas calls upon Parker Kincaid, a retired FBI agent and the top forensic document examiner in the country. Somehow, by midnight, they must find the Digger—before he finds them.

Crime twisted with well developed characters and surprise bad guys. Main clue from handwriting which is no longer even being taught in most schools. Enjoyed old fashion thriller with no need to pelt you with bad language or unnecessary sex scenes.

Not bad, just a bit of a reach. Good plot movement, did a good job of not letting the love interest interfere with the story. Well told, well narrated, worth reading.