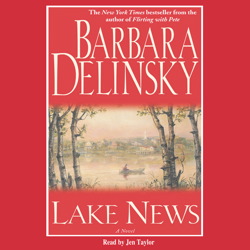 After an unscrupulous reporter falsely accuses Boston lounge singer Lily Blake of having an affair with a newly appointed Cardinal, she's hounded by the press, fired from her job, and robbed of all her public freedom. The humiliation and violation of privacy leaves her no choice but to retreat to her rural hometown of Lake Henry, New Hampshire. In search of refuge, Lily forms an uneasy alliance with John Kipling, a former Boston reporter with trust issues of his own. Now editing Lake Henry's local newspaper, John cannot ignore Lily's appeal or her plight -- even at the risk of taking on his former colleagues. Rewarding and unforgettable, a stirring novel of hope and redemption, Lake News offers an intimate look at the complex relationship between an enigmatic man and a vulnerable but spirited woman, both struggling to find a new sense of community in a place they once called home.