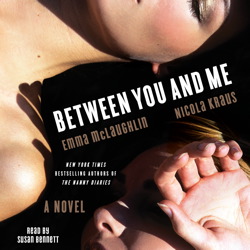 Between You and Me: A Novel

The authors of the #1 New York Times bestseller The Nanny Diaries take “an unflinching look at the price of fame” (Booklist) in this story of a young woman trying to escape her ambitious family.

Growing up in small-town Oklahoma, cousins Logan and Kelsey Wade were raised like sisters. Rarely separated, they became each other’s lifelines, escaping into the small joys of childhood to survive the increasing chaos in their family. Then one day Logan woke up and Kelsey and her parents were gone.

Years later, Kelsey has been propelled by her relentless parents to mega-stardom, her voice a radio fixture and her face on billboards worldwide. Meanwhile, Logan is trying to carve out her own life in New York City despite the constant reminders of her cousin’s absence. Though she has long since stopped trying to solve the mystery of their last hours together, the inexplicably fractured memories haunt her.

Then on Logan’s twenty-seventh birthday, she gets the call that she’s been longing for—and dreading. Before she can second-guess herself, she’s on a plane to L.A. to reunite with Kelsey and the parents who ripped them apart, but Logan will soon learn that some family secrets are kept hidden for a reason.