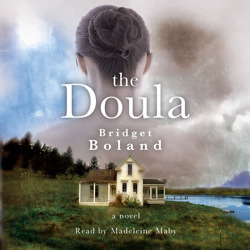 In the powerful tradition of Chris Bohjalian’s Midwives and Jodi Picoult’s Handle With Care comes a riveting debut novel about a doula, trained to support women and their families during childbirth, on trial for her best friend’s death.

When you come from a family of funeral directors, the telephone rings ominously in the middle of the night. For a doula, it resonates with eager anticipation. Either way, it always means lives are about to change. . . .

It might seem like birth and death lie at opposite ends of a spectrum, but to Carolyn Connors, they are mirror images. Caro is no stranger to death, having grown up in a funeral home, but after witnessing her mother’s miscarriage and her brother’s tragic drowning as a child—neither of which she is allowed to discuss—she chooses to become a doula, celebrating the arrival of life rather than its departure.

When her glamorous lifelong best friend, Mary Grace, calls with the exciting news that she is pregnant, Caro packs up her life and leaves home to be MG’s birthing coach. But tension escalates between Caro and MG’s domineering husband, Brad, and the sensitive doula’s advice falls on deaf ears. MG cuts off all contact until complications with her pregnancy leave her with no one else to call. Hurrying to the unborn child’s rescue and watching the life drain from her best friend’s body, Caro thinks the nightmare can’t get any worse. . . .

Until Brad accuses her of medical malpractice. For the first time in her life, Caro must confront the painful guilt, loss, and shame that have trailed her from the past, leading her to the most profound rebirth of all.