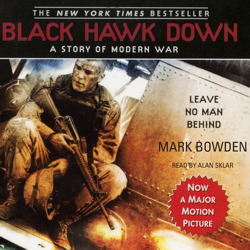 This book had me in the fight every moment was a moment with those brave men the movie can kiss a ball sack compared to the book I was there in spirit than I was there as a Marine in Iraq 2004 their mistakes became our new sop's how much water chow and ammo we were gonna need on every mission was now a big f#$%g deal!!! As it should be! I as a Marine squad leader would never make the mistake of running out of water or chow or ammo because the blue print was already there I read it Black Hawk Down dont [email protected]#$g make those mistakes "get it on the Humvees and let's freaking go"

I enjoyed this unabridged book even more than the movie. I was happy to know the movie was true to the storyline.

I listened to the abridgement of the book. It was well done and went along pretty much as the movie did. It made me wish a full copy of the book had been available . . . . and that's a good thing.

This is a detail oriented book, therefore, the abridged version is inadequate. It's not such a long book. Insist on the full version.

A great listen! Well done - made the miles fly by as I sat in traffic!

I didn't really expect that a book completely based on a single combat action experience (ie I shot at this, then ran over here and a bullet whizzed by me) could hold my attention for hours, but the author did an amazing job at keeping me interested and on the edge of my seat..

Very good book. Keeps you on the edge of your seat. Amazing how a battle situation can turn in a matter of moments and how a few minor human mistakes and/or events can have such a huge impact.