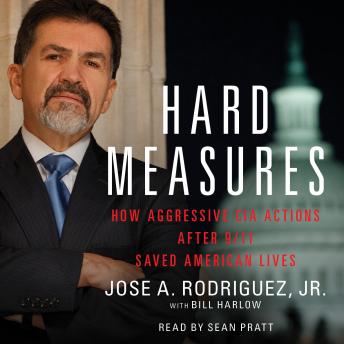 The New York Times bestselling memoir about the creation and implementation of the controversial Enhanced Interrogation Techniques by the former Chief Operations Officer for the CIA’s Counterterrorism Center.

AS SEEN ON 60 MINUTES

Former Chief of the CIA’s Counterterrorism Center, Jose A. Rodriguez, Jr., reveals how, in the wake of 9/11, government-approved hard measures used on captured high-level al Qa’ida operatives derailed terrorist threats to the U.S., contributed to the capture of Usama bin Ladin, and saved countless American lives. That is, until initial support gave way to shortsighted political correctness, leaving those responsible for protecting our nation second-guessed, hamstrung, and investigated. In effect, the United States has chosen to willfully and unilaterally disarm itself in the war on terror.

In Hard Measures, Rodriguez melds his fascinating life story with a reasoned, previously untold, and convincing case for hard measures. Fully disclosing explosive details of when and how they were used, and why these methods were necessary, he offers a rare, insiders’ look at an issue that seizes public attention and inspires vigorous debate.