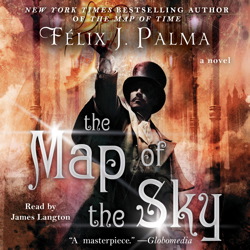 The Map of the Sky: A Novel

The fate of the earth hangs in the balance as H.G. Wells’ The War of the Worlds is transformed from the work of one writer’s imagination into a terrifying reality for all mankind.

1898. New York socialite Emma Harlow agrees to marry well-to-do Montgomery Gilmore, but only if he first accepts her audacious challenge: to reproduce the Martian invasion featured in H. G. Wells’s popular novel The War of the Worlds. Meanwhile in London, Wells himself is unexpectedly made privy to certain objects, apparently of extraterrestrial origin, that were discovered decades earlier on an ill-fated expedition to the Antarctic. On that same expedition was an American crew member named Edgar Allan Poe, whose inexplicable experiences in the frozen wasteland would ultimately inspire him to create one of his most enduring works of literature.

When eerie, alien-looking cylinders begin appearing in London, Wells is certain it is all part of some elaborate hoax. But soon, to his great horror, he realizes that a true invasion of Earth has indeed begun. As brave bands of citizens converge on a crumbling London to defend it against utter ruin, Emma and her suitor must confront the enigma that is their love, a bright spark of hope even against the darkening light of apocalypse.

Palma dazzled readers with his instant New York Times bestseller The Map of Time. In The Map of the Sky, he embarks on an even more thrilling speculative journey, one that links the earth and the heavens, the familiar and the bizarre, the impossible and the inevitable.

it's quite intriguing and fascinating story. I love how everything came together. this book makes you think