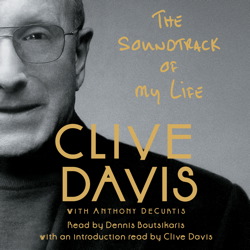 The Soundtrack of My Life

Orphaned in his teens, Davis earned a full scholarship to New York University and another to Harvard Law School. He served as General Counsel of Columbia Records and, in a totally unexpected stroke of fate, became head of the company overnight. More surprisingly, he learned he had “ears,” a rare ability to spot special talent and hit records. Those ears contributed to the success of three companies—Columbia, Arista, and J—where Davis dis­covered and developed more unique artists than anyone in the history of the music industry.

What began on the grass at the Monterey Pop Festival with the signing of Janis Joplin has evolved into a lifelong passion and calling, spanning genres, including rock, pop, R&B, country, jazz fusion, and hip-hop. His is the imprimatur that has helped shape contemporary music and, over the years, our popular culture.

The Soundtrack of My Life is an essential book for anyone interested in the story of popular music, the fascinating ups and downs of the music business, the alchemy of hits, and the dramatic life of a brilliant leader...and listener. It is a riveting read from beginning to end.

Very good behind the scenes look at the music business. Gave me a new appreciation of what it takes to create the commercial aspects of recording. Great insight into the professional lives of the musicians and how they can sometimes get in their own way. Did not need the commentary on Clives sexual preferences ... don't care!