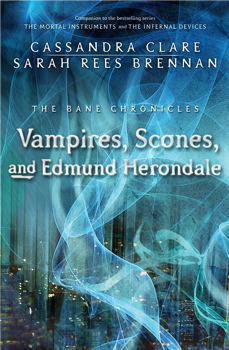 The Vampires, Scones, and Edmund Herondale

#3 of The Bane Chronicles

Andrew Scott could read the ingredients on a can of chicken noodle soup and it would be pleasant, hypnotic and inviting. I thoroughly enjoyed the way he changed his accent for the different characters and pulled them off the pages of the book to walk around inside the corridors of my mind. I found the different accents also separated the flow of the dialogue between characters so you had a sense of who was who; it gave each of them thier own definition. The person listening to the story could fabricate, for themselves, based on the voice Andrew gave, what each character might look like according to their "creation" of that character in their minds. Even, so far as to where they might be standing or sitting in reference to the room, street or place of gathering appropriate to the part of the story being told. This was very nicely done in my opinion and makes for great story telling. Truth be told, Andrew's voice could melt butter in a freezer....with the smallest whisper. Well done, well done!