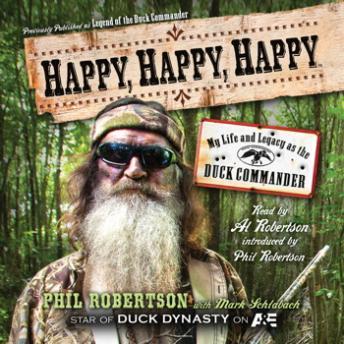 From the TV smash hit Duck Dynasty® comes a no-holds-barred autobiography of Phil Robertson and the three things that matter most to him: Faith, family, and ducks.

It isn’t often that a person can live a dream, but Phil Robertson—better known as the Duck Commander—has proven that it is possible with vision, hard work, helping hands, and an unshakable faith in the Almighty. Phil’s is the remarkable story of one man who followed his faith in God and soon after invented a duck call that would begin an incredible journey to the life he had always dreamed of for himself and his family. In the love of his country, his family, and his maker, Phil has finally found the ingredients to the good life he always wanted.

In Happy, Happy, Happy, you’ll go beyond the scenes of Duck Dynasty and learn about Phil’s colorful past and the wild road to the blessed life he leads today. Before, Phil’s passion for the outdoors led him down some shady paths, and as a young proprietor of a rough bar, he says, he lived a life of “romping, stomping, and ripping.” But through it all, Phil felt he was a “called” man—called to live off the land, called to leave a career in football for duck hunting, called to create a new kind of duck call, and finally, called to follow God and lead a life of faith.

In this eye-opening book, you’ll feel like you’re sitting face-to-face with Phil as he tells his story, and you’ll see that his enthusiasm for duck hunting and the Lord is no act—it is truly who he is.

great book. it kept you invested to listen and wanting to hear more.

Very good book, couldn't stop listening! Very down to earth facts, backed up by personal inflection. I will listen to it again!

I love this humble family! If we could only follow their example!

I have been there, done that. Bought the shirt. What else can I say? What else is there to say? The most important lessons are most often those things we must wade through by ourselves and live to recognize the truths for ourselves .

I have a whole new respect for this wonderful family and all they have gone through without giving up or in. God Blessed them. Wonderful book.

Great stuff! Got too detailed with technicalities of duck hunting for the layman, but absolutely loved it as did my kids. More Duck Dynasty!

I read the book first in hard copy; I loved it. Now I want to listen to it where ever the road takes me.

This book is soothing to a woman's soul. This is a whole family that has order correct, God, family, and friends. I plan to buy a hard copy and give it to my beloved son in law. He is a young man who is a relatively new Christian with three young sons and a daughter on the way. I think that being able to watch duck dynasty is such a treat too. I know Mr. Phil coined happy, happy, happy but that is just how I feel watching the show and now reading this book. It is like a miracle to have a show that anyone can watch and not be fearful that your grandchildren might be listening. Better still is the freedom of watching a Christian family not be afraid but rather exalt our Savior by ending their show with a prayer. In a time when our country is falling so far from our founding fathers faith, the Robertson clan are a clean, beautiful refreshing and hopeful breath of pure bliss to me. I even do not mind that my baby sister wears a tee shirt that says Sy is my role model.

Enjoyable read all the way through. Stories kept my interest! Reading was less than perfect, but honest and real. Good job Robertsons!! Thanks!

Good book but I wish Phil would have read the whole thing instead of Alan.