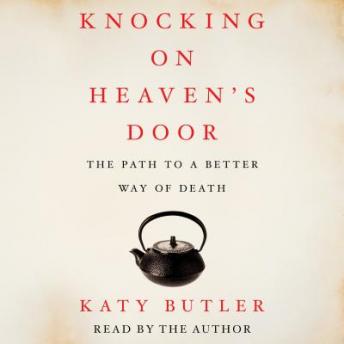 Knocking on Heaven's Door: The Path to a Better Way of Death

“A thoroughly researched and compelling mix of personal narrative and hard-nosed reporting that captures just how flawed care at the end of life has become” (Abraham Verghese, The New York Times Book Review).

This bestselling memoir—hailed a “triumph” by The New York Times—ponders the “Good Death” and the forces within medicine that stand in its way.

Award-winning journalist Katy Butler was living thousands of miles from her aging parents when the call came: her beloved seventy-nine-year-old father had suffered a crippling stroke. Katy and her mother joined the more than 28 million Americans who are shepherding loved ones through their final declines.

Doctors outfitted her father with a pacemaker, which kept his heart going while doing nothing to prevent a slide into dementia, near-blindness, and misery. When he said, “I’m living too long,” mother and daughter faced wrenching moral questions. Where is the line between saving a life and prolonging a dying? When do you say to a doctor, “Let my loved one go?”

When doctors refused to disable the pacemaker, condemning her father to a lingering death, Butler set out to understand why. Her quest had barely begun when her mother, faced with her own grave illness, rebelled against her doctors, refused open-heart surgery, and met death the old-fashioned way: head-on.

Part memoir, part medical history, and part spiritual guide, Knocking on Heaven’s Door is a map through the labyrinth of a broken medical system. Technological medicine, obsessed with maximum longevity, is creating more suffering than it prevents. Butler chronicles the rise of Slow Medicine, a movement bent on reclaiming the “Good Deaths” our ancestors prized. In families, hospitals, and the public sphere, this visionary memoir is inspiring the difficult conversations we must have to light the path to a better way of death.

Knocking on Heaven's Door: The Path to a Better Way of Death