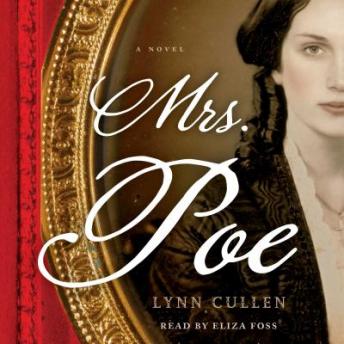 Inspired by literature’s most haunting love triangle, award-winning author Lynn Cullen delivers a pitch-perfect rendering of Edgar Allan Poe, his mistress’s tantalizing confession, and his wife’s frightening obsession in this new masterpiece of historical fiction to which Sara Gruen says, “Mrs. Poe had my heart racing...Don't miss it!”

1845: New York City is a sprawling warren of gaslit streets and crowded avenues, bustling with new immigrants and old money, optimism and opportunity, poverty and crime. Edgar Allan Poe’s “The Raven” is all the rage—the success of which a struggling poet like Frances Osgood can only dream. As a mother trying to support two young children after her husband’s cruel betrayal, Frances jumps at the chance to meet the illustrious Mr. Poe at a small literary gathering, if only to help her fledgling career. Although not a great fan of Poe’s writing, she is nonetheless overwhelmed by his magnetic presence—and the surprising revelation that he admires her work.

What follows is a flirtation, then a seduction, then an illicit affair…and with each clandestine encounter, Frances finds herself falling slowly and inexorably under the spell of her mysterious, complicated lover. But when Edgar’s frail wife, Virginia, insists on befriending Frances as well, the relationship becomes as dark and twisted as one of Poe’s tales. And like those gothic heroines whose fates are forever sealed, Frances begins to fear that deceiving Mrs. Poe may be as impossible as cheating death itself…

And don't miss the next captivating novel from Lynn Cullen—Twain’s End—where the acclaimed author tells a fictionalized imagining of the relationship between iconic author Mark Twain and his personal secretary, Isabel Lyon.