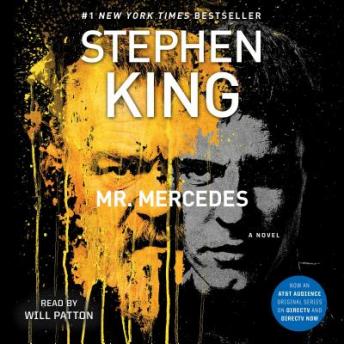 WINNER OF THE EDGAR AWARD FOR BEST NOVEL
#1 New York Times bestseller! In a high-suspense race against time, three of the most unlikely heroes Stephen King has ever created try to stop a lone killer from blowing up thousands. “Mr. Mercedes is a rich, resonant, exceptionally readable accomplishment by a man who can write in whatever genre he chooses” (The Washington Post).

The stolen Mercedes emerges from the pre-dawn fog and plows through a crowd of men and women on line for a job fair in a distressed American city. Then the lone driver backs up, charges again, and speeds off, leaving eight dead and more wounded. The case goes unsolved and ex-cop Bill Hodges is out of hope when he gets a letter from a man who loved the feel of death under the Mercedes’s wheels…

Brady Hartsfield wants that rush again, but this time he’s going big, with an attack that would take down thousands—unless Hodges and two new unusual allies he picks up along the way can throw a wrench in Hartsfield’s diabolical plans. Stephen King takes off on a “nerve-shredding, pulse-pounding race against time” (Fort Worth Star-Telegram) with this acclaimed #1 bestselling thriller.

Loved this book! Couldn’t stop listening - got super involved with the characters fast and the narrator was amazing! I’ll be listening to this book again on the future.

love this trilogy!!! I've listened to it atleast 4 times and its better each time. I wish he'd make another. I know Holly is in another book but isn't the same. Will is a great narrator in all his work. Steve u do great work and this is one of my fave series after the dark tower. I will recommend it again to anyone.

Having read The Outsider and If It Bleeds before Mr. Mercedes. I was always wondering who this Bill Hodges was that Holly Gibney was always referring too! DUH!!! So after reading book one of this 3 book trilogy I can safely say I know now!! I’m excited to read book 2 and 3 and then back to The Outsider and If It Bleeds to complete the circle! I love Will Patton as the narrator! He has narrated each of the books in the series and that is definitely important to make the feel of the stories connect to each other!

Will Patton did an amazing job as the narrator. Really brought the characters to life. Great story. Can’t wait for more from Bill Hodges.

Loved it. Very Red Dragon, excited for the next.

I am not an horror book reader for the most part but this book was pitch perfect. The plot characters narration and storytelling are marvelous. I recommend this trilogy as well as the series that was filmed. Highly recommender.

such a great trilogy !!!

Very good story! Will Patton does a great job!

Loved this book. Couldn’t wait to listen to the next chapter. I literally was a captivating audience!

I loved it. Listening to the next book now. Totally addicted!

Great, great, great! I ordered the next book the second I finished this. Loved it!

What can I say...Steven King...Can hardly wait for the next Audio Book. The narrator has just the right voice. It's like beeing right in the middle of it all.

An excellent listen. Plenty of suspense and plenty of twists and turns.

A very good mystery story by King. Will Patton does an excellent job in narration. One of the better narrators I've listened to. Great character renditions.

1st Stephen King read. I enjoyed it. I especially liked the ending. Looking forward to watching the series “Mr. Mercedes “

Love love love this series!!! The characters are vivid and fun to love and hate!!

One of my top 5 favorite Stephen King books. Will Patton does a phenomenal job narrating.

My second audio book. I loved it. I really loved the narration. I can't wait for my next long drive to order the next one.

This was my first audiobook and I loved it! It start slow but once the story builds up it's really awesome! Will Patton did a perfect job here! A must listen!

Awesome book. I read all Kings book and this was a nice change of pace. I couldn't stop listening.

I have listened to many audio books, this one is by far my favorite! Will Patton was the perfect choice for this book, he is awesome. I have already started the next book, "Finders Keepers" and once again, Will Patton is fantastic.

It was absolutely awesome reading; Will Patton does a great job! I loved the story as well. Very different for a King novel, but still great.

I'm not a huge Stephen King fan, however, this audiobook is riveting and engaging. The premise and characters are great. Makes long commutes pleasurable.

I enjoyed the story. Was a bit different than past SK books I have read. Looking forward to the second book in the trilogy.

Although a fairly predictable outcome, felt it was well written with a great deal of suspense and some twist and turns.

Wow, what a thriller. Loved listening to this book on my commute, kept me on edge.

Another good book from Steven King. I love the detail of the story line. I can always see the story as its being read. Will Patton is the perfect narrator for ANY Steven King novel.

Stephen King DOES NOT disappoint! Wonderfully written and the narration by Will Patton was fantastic!! The many point of views from each charter was brilliant. I found myself feeling the anxiety and suspense of these charterers; that's what makes an awesome book!! I can't wait to get the follow up to this. Loved, Loved, Loved this book!!!!!!!

I have seen his movies, yet this is my first Stephen King novel. It did not disappoint! Will Patton is the PERFECT narrator for King's work. Enjoy!

Beautifully narrated and very well written. Stephen King is my favorite author and when read by Patton they have my undivided attention! An excellent combo!

Loved the narrator, I'll read anything he reads! Hope to see more from him

I love Will Patton as narrator. This isn't Stephen King's best but worth the money and a good listen non the less.

I give this excellent book two thumbs up. The narrator was excellent also. Kept me interested. I've always been a Stephen King fan.

Great read. I read "Finders Keeper" first, so read this latter part of the story before the earlier part. The depth of psychosis and paranoia of the evil chqracter was quite believable.

Love this book. The narrator was just a fantastic match for the vibe of this book.

Sometimes you can forget how good an audiobook can be after a string of mediocre books. This book will remind you. King get's you interested from the very first paragraph and keeps you on the edge of your seat until the last paragraph. Don't miss this one.

This was a very good book. I couldn't wait to get in my car to listen to it. As most have said, narrator does a fantastic job.

Enjoyed the book there is no better story writer than Mr King. He grabs your attention from the very first sentence

WOW Mr. King this is so new for you and a excellent change of pace. I understood all of the changes and more... and it was GREAT!!!!..I hope you continue this way of writing. I loved it. To be honest I was growing tired of complete Syfi kinda as getting lost could not figure out some of the off the wall monsters and such, but I have loved many past books, but this was a needed break. Kudos to you the Man and this changed me...... Great to you and the narrator.... Wow

Mr. King has definitely slipped from his previous writings. He really needs to quit with paying writers to do it for him or spend the time to do it well. This book was not original and barely interesting. Poorly thought out and planned. The narrator was a bit tough to get used to at first, but you'll eventually understand why he was chosen. But no need to be concerned with that because this book should be left on the shelf.

Best narrator I have ever heard. He is phenomenal.

end is funny. good book. jumps right into it. good personality on all characters

Love the book! A bit predictable but axing story telling!! Narrator did an amazing job

The narrator was great showing inflection and voice chamges for different characters. I really enjoyed the plot, especially liking they way Kimg chose to end it. Well done.