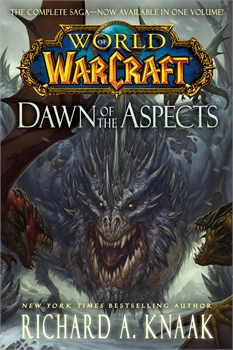 World of Warcraft: Dawn of the Aspects

THE AGE OF DRAGONS IS OVER.

Uncertainty plagues Azeroth’s ancient guardians as they struggle to find a new purpose. This dilemma has hit Kalecgos, youngest of the former Dragon Aspects, especially hard. Having lost his great powers, how can he—or any of his kind—still make a difference in the world?

The answer lies in the distant past, when savage beasts called proto-dragons ruled the skies. Through a mysterious artifact found near the heart of Northrend, Kalecgos witnesses this violent era and the shocking history of the original Aspects: Alexstrasza, Ysera, Malygos, Neltharion, and Nozdormu.

In their most primitive forms, the future protectors of Azeroth must stand united against Galakrond, a bloodthirsty creature that threatens the existence of their race. But did these mere proto-dragons face such a horrific adversary alone, or did an outside force help them? Were they given the strength they would become legendary for...or did they earn it with blood?

I've read about 9 warcraft books and have enjoy most of them but this one felt like it dragged on from time to time, but it had its good moments that kept you pushing further. the narrator did a great job at making you feel like you were immersed in some of the battles.

Definetly best books in all series, narrator is just golden, all of his reads (Warcrimes in particular, just behind this one) are pieces of a maserpiece not only to Warcraft fan base! More narrators with that kind of passion and commitment are needed!

It had its high points but lost me on some of the switch backs. It did not get to the point quick enough.