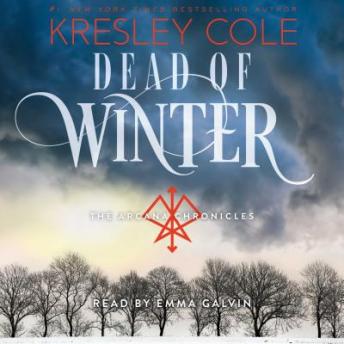 #3 of The Arcana Chronicles

Can Evie convince her rival loves to work together? Their survival depends on it in this third book of #1 New York Times bestselling author Kresley Cole’s Arcana Chronicles, a nonstop action tale of rescue, redemption, and a revenge most wicked.

Heartbreaking decisions
Evie was almost seduced by the life of comfort that Death offered her—until Jack was threatened by two of the most horrific Arcana, The Lovers. She will do anything to save him, even escape Death’s uncanny prison, full of beautiful objects, material comforts…and stolen glances from a former love.

Uncertain victory
Despite leaving a part of her heart behind with Death, Evie sets out into a frozen and perilous post-apocalyptic wasteland to meet up with her allies and launch an attack on The Lovers and the vast army they command. Such formidable enemies require a battle plan, and the only way to kill them once and for all may mean Evie, Jack, and Death allying. Evie doesn’t know what will prove more impossible: surviving slavers, plague, Bagmen and other Arcana—or convincing Jack and Death to work together.

Two heroes returned
There’s a thin line between love and hate, and Evie just doesn’t know where she stands with either Jack or Death. Will this unlikely trio be able to defeat The Lovers without killing one another first?

So cool can't wait to continue the series

wow what a change from book 1. Finally Evie gets more strength and far less naive. How I wish Jack had not been written in for her at first I was rooting for him but he can't hold a candle to Death. Hes far more deserving of her and vice versa. I hope to God this book goes in the right direction.

I adore this book series. I love both of the guys and the main character and premise. I am anxiously awaiting the next! meanwhile I am going to listen to other books with the same narrator because I think my soul misses her voice. I love the Arcana Chronicles!

I loved it had just enough action to keep you in to it with a little love story throne in to keep it interesting.