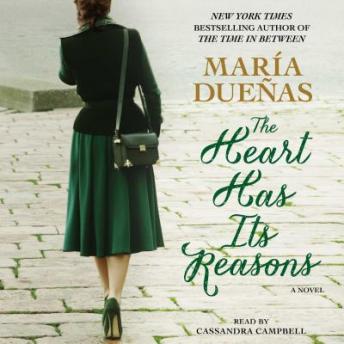 The Heart Has Its Reasons: A Novel

Declared “a writer to watch” (Publishers Weekly, starred review), New York Times bestselling author María Dueñas pours heart and soul into this story of a woman who discovers the power of second chances.

A talented college professor in Madrid, Blanca Perea seems to have it all. But her world is suddenly shattered when her husband of twenty years leaves her for another woman. Questioning the life she once had and whether she truly knows herself, Blanca resolves to change her surroundings. She accepts what looks like a boring research grant in California involving an exiled Spanish writer who died decades ago. Anxious to leave her own troubled life behind, she is gradually drawn into his haunted world, with its poignant loves and unfulfilled ambitions.

But in delving into the past, Blanca finds herself simultaneously awakened to the present by Daniel Carter, a charismatic professor with crucial knowledge about the dead writer that he has never before revealed. Amid this web of passion, conflict, and hidden feelings, including her own, Blanca advances like an avid detective, refusing to quit, and ultimately discovers startling answers that resonate deeply in her own life.

Evocative, lyrical, and humorous, The Heart Has Its Reasons is a journey of the soul from the pangs of the past to the vibrant present. It is a story about the thrill of creating one’s life anew.