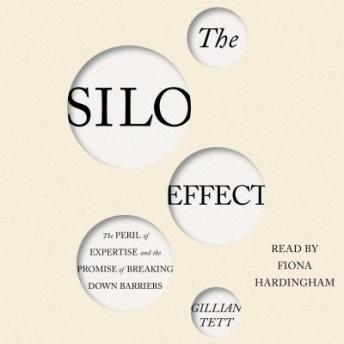 The Silo Effect: The Peril of Expertise and the Promise of Breaking Down Barriers

Award-winning journalist Gillian Tett “applies her anthropologist’s lens to the problem of why so many organizations still suffer from a failure to communicate. It’s a profound idea, richly analyzed” (The Wall Street Journal), about how our tendency to create functional departments—silos—hinders our work.

The Silo Effect asks a basic question: why do humans working in modern institutions collectively act in ways that sometimes seem stupid? Why do normally clever people fail to see risks and opportunities that later seem blindingly obvious? Why, as Daniel Kahnemann, the psychologist put it, are we sometimes so “blind to our own blindness”?

Gillian Tett, “a first-rate journalist and a good storyteller” (The New York Times), answers these questions by plumbing her background as an anthropologist and her experience reporting on the financial crisis in 2008. In The Silo Effect, she shares eight different tales of the silo syndrome, spanning Bloomberg’s City Hall in New York, the Bank of England in London, Cleveland Clinic hospital in Ohio, UBS bank in Switzerland, Facebook in San Francisco, Sony in Tokyo, the BlueMountain hedge fund, and the Chicago police. Some of these narratives illustrate how foolishly people can behave when they are mastered by silos. Others, however, show how institutions and individuals can master their silos instead.

“Highly intelligent, enjoyable, and enlivened by a string of vivid case studies….The Silo Effect is also genuinely important, because Tett’s prescription for curing the pathological silo-isation of business and government is refreshingly unorthodox and, in my view, convincing” (Financial Times). This is “an enjoyable call to action for better integration within organizations” (Publishers Weekly).