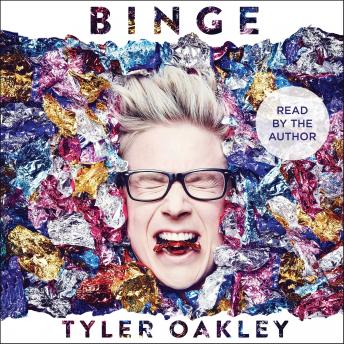 For someone who made a career out of over-sharing on the Internet, Tyler has a shocking number of personal mishaps and shenanigans to reveal in his first book: experiencing a legitimate rage blackout in a Cheesecake Factory; negotiating a tense stand­off with a White House official; crashing a car in front of his entire high school, in an Arby’s uniform; projectile vomiting while bartering with a grandmother; and so much more. In Binge, Tyler delivers his best untold, hilariously side-splitting moments with the trademark flair that made him a star.

I loved the book... No wonder I love listening to Tyler Oakley. #awesome

This is the first book I listened here and it was amazing! Thanks for making my work days better!

Purchased for Granddaughter ! She enjoyed it, She was laughing and giggling throughout.

Absolutely loved it!! Have a new found respect for Tyler he is beautiful and so was the book it slayed me!

I honestly had to go out of my way to rate this audiobook because Tyler is just an amazing human being. He's very funny, very real, and very open. As a college student, it truly made my day just listening to his audiobook for an hour. I just needed to hear him read his crazy stories to me so I could get a jolt of positivity and laughter. I also loved how Tyler told me about some of his most personal moments, his highs and lows. After listening to his book I feel like I could go up to him and call him Matthew as if I've known him for years. Tyler, keep up the good work. Do whatever makes you happy in life (try not so stress yourself out too much), and thank you so much for sharing your story. I hope I'll be able to meet you one day. You seem like a joy to be around. And if you do happen to read this: @nellis_iii I'd be honored if you gave me a follow. Keep on slayin'!

This book is by far my favorite audiobook I have ever read. When getting ready to drive back to graduate school, I put it on and listened to it for the entire seven hour drive back. I laughed out loud and even played it while waiting for my food from McDonald's. It is so honest, funny, and incredibly real. Thank you Tyler for being so relatable. You da best. @rachfinneyxd

Tyler Oakley is my favorite YouTuber and one of my favorite humans. I got binge for Christmas and could not put it down. It's is the best Christmas present I have gotten in a while. Tyler Oakley makes my worst days better. I could listen to him talk about golf and not get bored. This book is inspiring and my overall favorite book.

In this book, Tyler Oakley reveals things about his life that he has never mentioned before in any of his YouTube videos, starting from the very first sentence! I finished this book in just a few days, because it was so funny! Every Tyler Oakley fan should read/listen to this book! :D

I love Tyler and this biography is so interesting to hear his story. I could listen to Tyler's voice all day. Great job Tyler

I LOVE LOVE LOVED BINGE! Tyler is my favorite YouTuber and this book was just so amazing!!

A very fun and enticing read from one of the most popular YouTube creators. An insightful look into the struggles of constantly creating and being a role model for millions of young people. Full of wisdom on balancing career and hobbies, family drama, love and loss, there is so much to be gained from the wild life of Tyler Oakley.

How could you read a Tyler Oakley book without listening to him reading it! TOTALLY RECOMMEND IT! Just do it. Listen. read. laugh. slightly cry and get lost in it. Read it when your stressed and we can all just thank Tyler when we are done. As I'm about to do on Twitter now. Thanks Tyler for the amazing recording and as well as the book. We love you!