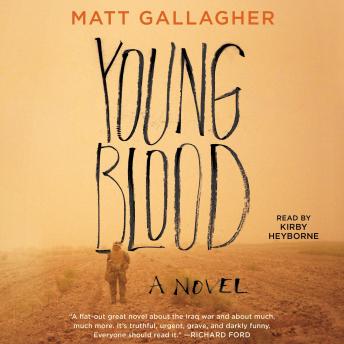 “An urgent and deeply moving novel” (Michiko Kakutani, The New York Times) about a young American soldier struggling to find meaning during the final, dark days of the War in Iraq.

The US military is preparing to withdraw from Iraq, and newly minted lieutenant Jack Porter struggles to accept how it’s happening—through alliances with warlords who have Arab and American blood on their hands. Day after day, Jack tries to assert his leadership in the sweltering, dreary atmosphere of Ashuriyah. But his world is disrupted by the arrival of veteran Sergeant Daniel Chambers, whose aggressive style threatens to undermine the fragile peace that the troops have worked hard to establish.

As Iraq plunges back into chaos and bloodshed and Chambers’s influence over the men grows stronger, Jack becomes obsessed with a strange, tragic tale of reckless love between a lost American soldier and Rana, a local sheikh’s daughter. In search of the truth and buoyed by the knowledge that what he finds may implicate Sergeant Chambers, Jack seeks answers from the enigmatic Rana, and soon their fates become intertwined. Determined to secure a better future for Rana and a legitimate and lasting peace for her country, Jack will defy American command, putting his own future in grave peril.

For fans of Phil Klay’s Redeployment or Ben Fountain’s Billy Lynn’s Long Halftime Walk, Youngblood provides startling new dimension to both the moral complexity of war and its psychological toll.