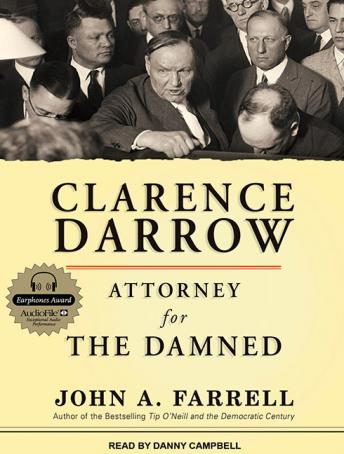 Clarence Darrow: Attorney for the Damned

Written By: John A. Farrell

Clarence Darrow is the lawyer every law school student dreams of being:
on the side of right, loved by many women, played by Spencer Tracy in Inherit the Wind. His days-long closing arguments delivered without notes won miraculous reprieves for men doomed to hang.
Darrow left a promising career as a railroad lawyer during the
tumultuous Gilded Age in order to champion poor workers, blacks, and
social and political outcasts against big business, Jim Crow, and
corrupt officials. He became famous defending union leader Eugene Debs
in the land-mark Pullman Strike case and went from one headline case to
the next-until he was nearly crushed by an indictment for bribing a
jury. He redeemed himself in Dayton, Tennessee, defending schoolteacher
John Scopes in the 'Monkey Trial,' cementing his place in history.
Now, John A. Farrell draws on previously unpublished correspondence and
memoirs to offer a candid account of Darrow's divorce, affairs, and
disastrous finances; new details of his feud with his law partner, the
famous poet Edgar Lee Masters; a shocking disclosure about one of his
most controversial cases; and explosive revelations of shady tactics he
used in his own trial for bribery.   Clarence Darrow is a sweeping, surprising portrait of a leg-endary legal mind.

Clarence Darrow: Attorney for the Damned

by John A. Farrell