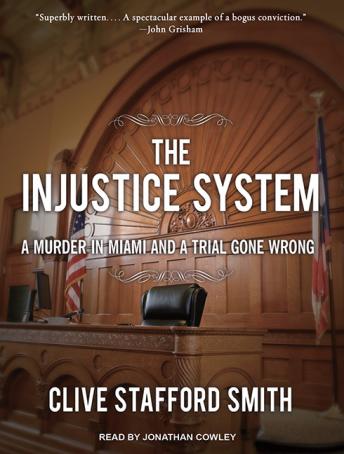 The Injustice System: A Murder in Miami and a Trial Gone Wrong

A man accused of a murder he didn't commit languishes on death row. A crusading lawyer is determined to free him. This powerful book reads like a compelling legal thriller with one crucial difference: Justice is not served in the end.In 1986, Kris Maharaj was arrested in Miami for the murder of his ex-business partner. A witness swore he saw him pull the trigger and a jury found him guilty and sentenced him to death. But he swears he didn't do it. Twenty years later, he's bankrupted himself on appeals and been abandoned by everyone but his wife.Enter Clive Stafford Smith, a charismatic public defender with a passion for lost causes who calls up old files and embarks on his own investigation. It takes him from Miami to Nassau to Washington as he uncovers corruption at every turn. Step by step, Clive slowly dismantles the case, guiding us through the whole scaffolding of the legal process and revealing a fundamentally broken system whose goal is not so much to find the right man as to convict.A bombshell whose final chapter should re-open a long closed case, The Injustice System will appeal to fans of true crime and anyone who has served on a jury.

Injustice System: A Murder in Miami and a Trial Gone Wrong