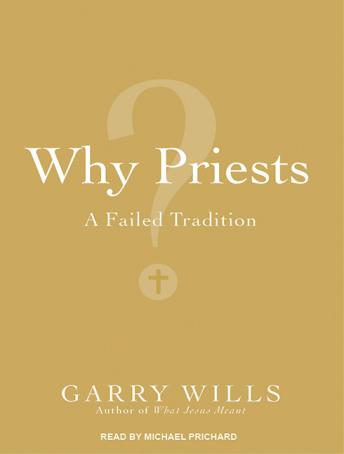 Why Priests?: A Failed Tradition

Bestselling author of Papal Sin and Why I Am a Catholic,
Garry Wills spent five years as a young man at a Jesuit seminary and
nearly became a priest himself. But after a lifetime of study and
reflection, he now poses some challenging questions: Why do we need
priests at all? Why did the priesthood arise in a religion that began
without it and opposed it? Would Christianity be stronger without the
priesthood, as it was at its outset? Meticulously researched, persuasively argued, and certain to spark debate, Why Priests?
asserts that the anonymous Letter to Hebrews, a late addition to the
New Testament canon, helped inject the priesthood into a Christianity
where it did not exist, along with such concomitants as belief in an
apostolic succession, the real presence in the Eucharist, the
sacrificial interpretation of the Mass, and the ransom theory of
redemption. But Wills does not expect the priesthood to fade entirely
away. He just reminds us that Christianity did without it in the time of
Peter and Paul with notable success. Wills concludes with a
powerful statement of his own beliefs in a book that will appeal to
believers and nonbelievers alike and stand for years to come as a
towering achievement.

Why Priests?: A Failed Tradition