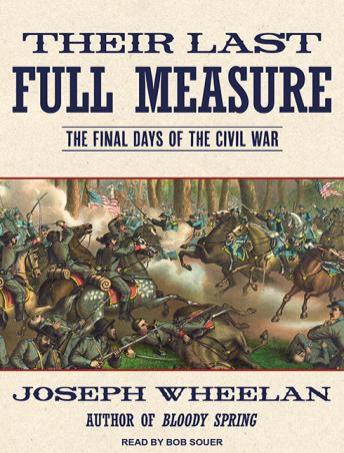 Their Last Full Measure: The Final Days of the Civil War

As the Confederacy steadily crumbled under the Union army's relentless hammering, dramatic developments in early 1865 brought the bloody war to a swift climax and denouement. Their Last Full Measure relates these thrilling events, which followed one another like falling dominoes-from Fort Fisher's capture to the burning of South Carolina's capital to the fall of Petersburg and Richmond and, ultimately, to Lee's surrender at Appomattox and Lincoln's assassination.

Acclaimed historian Joseph Wheelan braids the disparate events into a compelling, fast-paced account of powerful armies; civil and military leaders, both flawed and splendid; and ordinary people, black and white, struggling to survive the war's wreckage in Virginia, Georgia, and the Carolinas.

Their Last Full Measure: The Final Days of the Civil War