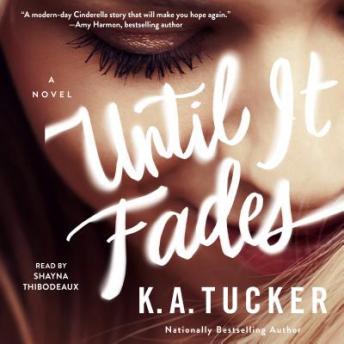 Until it Fades: A Novel

“Touching and complex…Tucker unerringly hits all the high notes of romance—the spark, the emotional depth, the mental and physical struggles—while creating a couple who seem perfectly attuned even when they are in conflict.” —Publishers Weekly (starred review)

Twenty-four-year-old truck stop waitress and single mother Catherine Wright has simple goals: to give her five-year-old daughter a happy life and to never again be the talk of the town in Balsam, Pennsylvania (population three thousand outside of tourist season).

And then one foggy night, on a lonely road back from another failed date, Catherine saves a man’s life. It isn’t until after the police have arrived that Catherine realizes exactly who it is she has rescued: Brett Madden, hockey icon and media darling.

Catherine has already had her fifteen minutes of fame and the last thing she wants is to have her past dragged back into the spotlight, only this time on a national stage. So she hides her identity. It works. For a time.

But when she finds the man she saved standing on her doorstep, desperate to thank her, all that changes. There’s an immediate connection, and it’s more electric than the bond of two people who endured a traumatic event. It’s something neither of them expected. Something that Catherine isn’t sure she can handle; something she is afraid to trust.

I finished the book begrudgingly, knowing after just a few minutes in the main character was not one that I could relate to. "Cath" as written, has a somewhat annoying personality... Resistant to just about everything from start to finish, then eventually giving in to everything, it's exhausting. Narrator's voice doesn't make the listen any better as it seems to not really match the character. Also, the narrator had some misplaced pauses. There's a speck of mystery (very, very tiny) to the book, otherwise it's totally predictable and not all that exciting.

This books lacks a real plot. Truly a disappointment. There is no challenge or adventure or excitement. The protagonist is supposed to be ~24 and the narrator sounds like a 65 year old midwestern grandmother. I do NOT recommend.