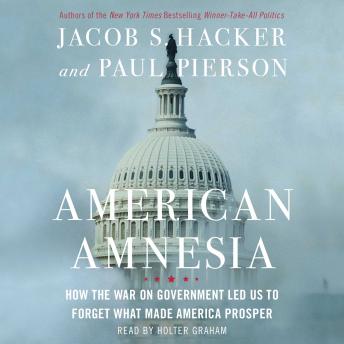 American Amnesia: How the War on Government Led Us to Forget What Made America Rich

In American Amnesia, bestselling political scientists Jacob S. Hacker and Paul Pierson trace the economic and political history of the United States over the last century and show how a viable mixed economy has long been the dominant engine of America’s prosperity. We have largely forgotten this reliance, as many political circles and corporate actors have come to mistakenly see government as a hindrance rather than the propeller it once was. “American Amnesia” is more than a rhetorical phrase; elites have literally forgotten, or at least forgotten to talk about, the essential role of public authority in achieving big positive-sum bargains in advanced societies.

The mixed economy was the most important social innovation of the twentieth century. It spread a previously unimaginable level of broad prosperity. It enabled steep increases in education, health, longevity, and economic security. And yet, extraordinarily, it is anathema to many current economic and political elites. Looking at this record of remarkable accomplishment, they recoil in horror. And as the advocates of anti-government free market fundamentalist have gained power, they are hell-bent on scrapping the instrument of nearly a century of unprecedented economic and social progress. In the American Amnesia, Hacker and Pierson explain the full “story of how government helped make America great, how the enthusiasm for bashing government is behind its current malaise, and how a return to effective government is the answer the nation is looking for” (The New York Times).

American Amnesia: How the War on Government Led Us to Forget What Made America Rich