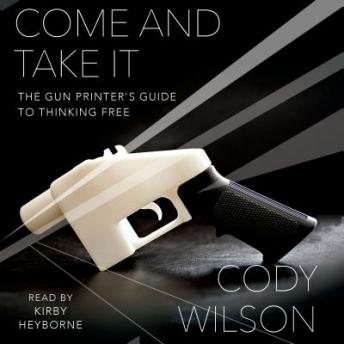 Come and Take It: The Gun Printer's Guide to Thinking Free

A startling philosophical manifesto for the twenty-first century on freedom of information, Come and Take It is the controversial yet thrilling story of the first ever-3D printable gun, developed by self-described crypto-anarchist and rogue thinker Cody Wilson.

In Defense Distributed, Cody Wilson’s employees worked against all odds to defend liberty and the right to access arms through the production of 3D printed firearms. Now, Wilson crafts a unique and critical guide through the digital revolution and follows a group of digital radicals as they navigate political subterfuge—deflecting interference from the State Department and the Bureau of Alcohol, Tobacco, Firearms and Explosives—to create a technological miracle, against all odds.

Harkening to both Zen and the Art of Motorcycle Maintenance and The Anarchist Cookbook, Come and Take It combines elements of a modern-day thriller with a fascinating philosophical treatise, and Wilson paints a scathing and timely portrait of an ideologically polarized America and his own struggle in the fight for liberty.

Come and Take It: The Gun Printer's Guide to Thinking Free