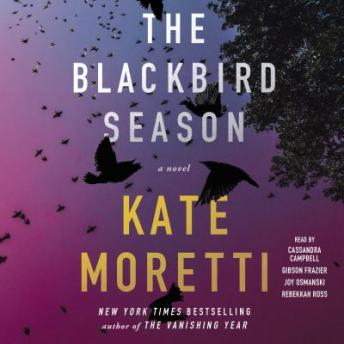 The Blackbird Season: A Novel

“Exceptional…a deliciously sinister glimpse into the duplicity of small-town lives and the ease with which people turn on each other when tragedy comes calling. Moretti's tale of jealousy and obsession is nothing less than dark magic. Witchery indeed.' —Kirkus Reviews, starred review

“Where did they come from? Why did they fall? The question would be asked a thousand times…

Until, of course, more important question arose, at which time everyone promptly forgot that a thousand birds fell on the town of Mount Oanoke at all.”

In a quiet Pennsylvania town, a thousand dead starlings fall onto a high school baseball field, unleashing a horrifying and unexpected chain of events that will rock the close-knit community.

Beloved baseball coach and teacher Nate Winters and his wife, Alecia, are well respected throughout town. That is, until one of the many reporters investigating the bizarre bird phenomenon catches Nate embracing a wayward student, Lucia Hamm, in front of a sleazy motel. Lucia soon buoys the scandal by claiming that she and Nate are engaged in an affair, throwing the town into an uproar…and leaving Alecia to wonder if her husband has a second life.

And when Lucia suddenly disappears, the police only to have one suspect: Nate.

Nate’s coworker and sole supporter, Bridget Harris, Lucia’s creative writing teacher, is determined to prove his innocence. She has Lucia’s class journal, and while some of the entries appear particularly damning to Nate’s case, others just don’t add up. Bridget knows the key to Nate’s exoneration and the truth of Lucia’s disappearance lie within the walls of the school and in the pages of that journal.