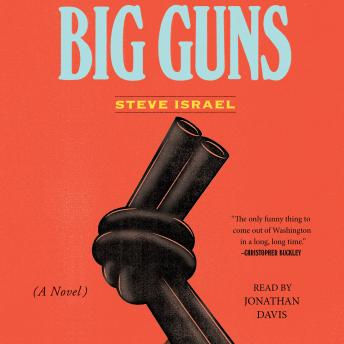 From Steve Israel, the Congressman-turned-novelist who writes “in the full-tilt style of Carl Hiaasen” (The Washington Post), a comic tale of the mighty firearm industry, a small Long Island town, and Washington politics: “Congress should pass a law making Big Guns mandatory reading for themselves” (Nelson DeMille).

When Chicago’s Mayor Michael Rodriguez starts a national campaign to ban handguns from America’s cities, towns, and villages, Otis Cogsworth, the wealthy chairman and CEO of a huge arms company in Asabogue, Long Island, is worried. In response, he and lobbyist Sunny McCarthy convince an Arkansas congressman to introduce federal legislation mandating that every American must own a firearm. Events soon escalate.

Asabogue’s Mayor Lois Leibowitz passes an ordinance to ban guns in the town—right in Otis Cogsworth’s backyard. Otis retaliates by orchestrating a recall election against Lois and Jack Steele, a rich town resident, runs against her. Even though the election is for the mayor of a small village on Long Island, Steele brings in the big guns of American politics to defeat Lois. Soon, thousands of pro-gun and anti-gun partisans descend on Asabogue, and the bucolic town becomes a tinderbox. Meanwhile, Washington politicians in both parties are caught between a mighty gun lobby and the absurdity of requiring that every American, with waivers for children under age four, carry a gun. What ensues is a discomfiting, hilarious indictment of the state of American politics.