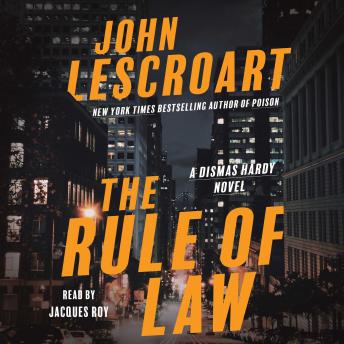 The Rule of Law: A Novel

Attorney Dismas Hardy is called to defend the least likely suspect of his career: his longtime, trusted assistant who is suddenly being charged as an accessory to murder in this instant New York Times bestseller from “the undisputed master of the courtroom thriller” (The Providence Journal).

Dismas Hardy knows something is amiss with his trusted secretary, Phyllis. Her strange behavior and sudden disappearances concern him, especially when he learns that her convict brother—a man who had served twenty-five years in prison for armed robbery and attempted murder—has just been released.

Things take a shocking turn when Phyllis is suddenly arrested for allegedly being an accessory to the murder of Hector Valdez, a coyote who’d been smuggling women into this country from El Salvador and Mexico. That is, until recently, when he was shot to death—on the very same day that Phyllis first disappeared from work. The connection between Phyllis, her brother, and Hector’s murder is not something Dismas can easily understand, but if his cherished colleague has any chance of going free, he needs to put all the pieces together—and fast.

A whip-smart, engrossing novel filled with shocking twists and turns, “The Rule of Law is vintage Lescroart, drawing on parallels between real-life and hot-button issues while also providing top-notch entertainment” (The Real Book Spy).

I have been a fan of John Lescroart since 2006 when I picked up his book "The Motive" while on deployment. Because of that one book, it led me to read all of his Dismas Hardy series and even the ones that branched off of them. This book brought back to life a story that was once told in a previous book which made it more intriguing for me to listen to. I highly recommend reading "The First Law" first to get a better perspective and appreciation for the story being told in this book. Nevertheless, I was not disappointed with the story. For me, it was the narration. When after reading the book series, and knowing the actors John envisioned playing the main characters in the book, it's hard to get past the way the narrator reads the dialog. For me, each character either sounded tired, smug, or simply emotionless. To give a better understanding, John is on record of saying that he would love to see Dennis Quad playing Dismas Hardy and Delroy Lindo playing Abe Glitsky. The narrator totally destroyed that vision. Now I am sure that many who read this review would see me as a person who is finding fault in the littlest thing, but that is simply not the case which is why I am giving the book a 4 star rating. In fact, I plan on reading this on my own when I purchase the hardcover or softcover to add to my collection. I am just trying to state that, as an avid reader of John Lescroart books, I was disappointed in the choice of narrator, and would have loved to hear the story told with a little more emotion and differences between each character. Cheers!