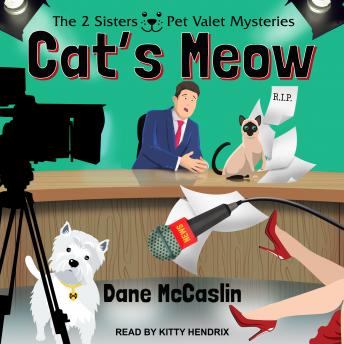 Retired schoolteacher Gwen Franklin has a new pet project-and a sideline in sleuthing. But this new case has a dangerous sting in the tail . . .

Gwen's calendar has been filling up ever since she was hounded by her best friend, Nora, into starting 2 Sisters Pet Valet Services. Now they've been invited to attend the annual Clear the Shelter event, hosted by Portland's very own blonde bombshell newscaster, Babs Prescott. Babs is convinced she's top dog among local celebrities, but it's clear that someone disagrees when Babs's body is found following a downtown press conference.

A story this juicy would be headline news at any time, but especially once local crime reporter Shelby Tucker is arrested for the murder. Gwen was Shelby's high school teacher, and she's sure her former pupil is innocent. But in that case, who was itching to take Babs out of the spotlight for good? As Nora and Gwen investigate, they find personal mysteries at odds with Babs's public persona, all leading to a killer who's not pussyfooting around . . .