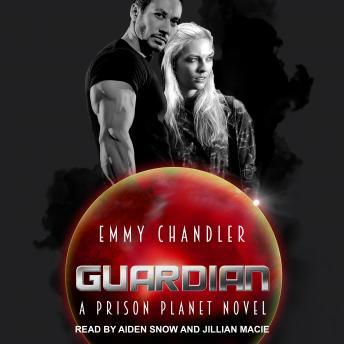 Audra Copeland is among dozens of newly convicted felons dropped off on the prison planet Rhodon, where she discovers that the women of zone four have a long-standing arrangement with the men. If they hand over six of the new arrivals, the men won't raid. And Audra has just been drafted.

She can take her chances on her own, or select a guardian. The deal is simple, if barbaric: sex, in exchange for food and safety from the other two hundred men in zone four. It's a terrifying proposal. The men are violent, filthy degenerates.

Then Audra sees Tyson at the edge of the crowd. A hulking, scarred figure, the other men call him a savage, but his clothes are clean, and he's holding a freshly caught rabbit. He can clearly protect what's his.

As compassionate as he is powerful, Tyson ignites something fierce in Audra, and their connection is white-hot. The problem? Every thirty days, she'll have to pick a new guardian.

Now that he's found Audra, Ty has every intention of keeping her for himself. Even if he has to destroy the fragile zone four peace treaty to do it.